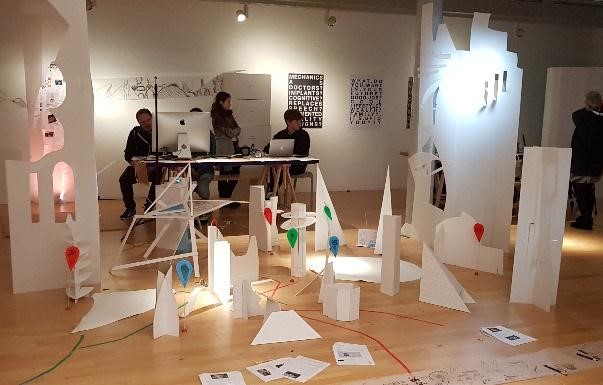 Schools targeted students in Years 9-13 who would benefit from a visit behind the scenes of these organisations to find out how the wheels and cogs turn. They met the teams that run art galleries, theatres, film companies, Liverpool City Council culture team and even a Safari Park. They discovered how they curate exhibitions and organise marketing, finance and operations. The programme aimed to build the confidence of these young people as they prepare for future work and study, and to communicate the importance of creative and cultural skills across all subjects and employment sectors.

The following schools and cultural partners worked together:

A level and GCSE students studying Art and Design at Cardinal Heenan visited the Tate gallery on 8 and 9 February. On the first day they visited different gallery departments and learned about the jobs and skills needed within these. This expanded their awareness of how a gallery operates – it’s not all just creating art and hanging it on walls! On the second day they took over the Tate Exchange Space on the first floor of the gallery. Working to the theme of ‘the future of work’ they designed posters, 3D sculpture, film and digital displays, exploring employers’ demand for creative skills and jobs at risk of automation. This space was visited by members of the public throughout the day.

‘The Tate experience was probably the best student opportunity I’ve been involved in – and that’s a lot of years! Karen and Jake connected well with the students who gained experience on two very important levels: working on a live brief, with practising artists, and exhibiting in the Tate; but also the insight into the varied opportunities there are within Tate – and possible creative pathways. From start to finish the planning was made easy (the travel arrangement took away a massive hurdle).’

Outcomes for the students working with Handstand Films included:

Culture Liverpool is the Liverpool City Council’s department responsible for organising city-wide events, such as the famous Giants and the River of Light installations and fireworks. The visit by students from Calderstones started with staff describing the different teams in their department and giving an overview of some event highlights. Next they introduced students to the different teams in their department, including the commercial team who talked about partnerships and sponsors. The students then split into teams to come up with ideas for potential sponsors for LIMF (Liverpool International Music Festival), including Monster energy drink and a children’s beach sponsored by Wall’s ice cream, with ‘make your own ice cream’ stands. They then visited St George’s Hall for a whistle stop ‘crime and punishment’ tour of the prison cells, the imposing court rooms and punishment stocks, before comparing these with the splendour of the biggest classical reception room in the UK: the Great Hall. Finally the film office talked to students about the big name productions that have been filmed in the city. For example the fantasy/action film Fantastic Beasts and Where to Find Them was filmed in St George’s Hall itself. Teacher Elena Sanchez said:

‘The trip to St George’s Hall was an amazing opportunity for the students to learn about the beautiful building, its story and opportunities for their futures.’

On Tuesday 16 January 2018, Merseyside Dance Initiative (MDI) hosted a visit by students from The Sutton Academy in St Helens. They took part in a dance class in the studio before meeting MDI’s Artistic Director, the Marketing and Finance team and the Community and Professional Dance Artists. They then visited the Capstone Theatre which would host the Leap Festival 2018. On their second visit the students produced an event that would take place at the festival.